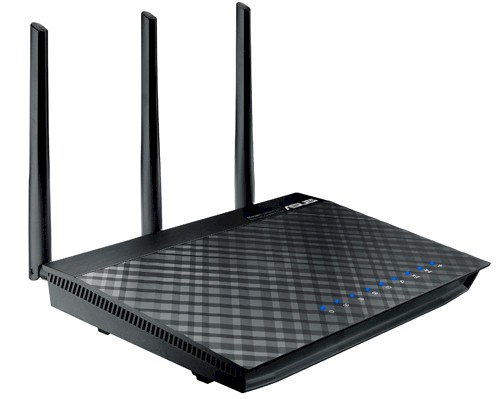 Fans of ASUS' RT-N66U "Dark Knight" router have been chomping at the bit to know whether its first draft 802.11ac offering is a better choice. So let me cut to the chase and say that that the RT-AC66U is not the successor to the N66 that you are hoping for.

It's not that the AC66 is a bad router. It's just that it doesn't really provide enough benefit for most users (those with non-11ac devices) to outweigh the pain of its unstable firmware and higher price. Details, you say? Read on.

Physically, the AC66 is a dead ringer for its N66 sibling. If it were not for the labeling on the front and bottom panels, you would not be able to tell the difference between them. ASUS hasn't endowed the AC with a slick name either. Too bad, since I think "Dark Helmet" is available...

The callout diagram below taken from the User Manual shows the indicators, ports, connectors and switches, which are item-by-item the same as on the N version.

As before, all ports are 10/100/1000 Mbps and there are two USB 2.0 ports for drive and printer sharing. A select number of USB WWAN modems are also supported that lets the router use 3G/4G networks as primary or backup internet sources.

ASUS seems to have a preference for 19V power supplies. The same diminutive wall-wart with its tiny connector plug used on the Dark Knight also powers the AC.

ASUS has delayed the release of internal photos, so I decided to open the AC up, even though I pretty much knew what was inside component-wise. Table 1 holds a summary of the AC66's key components along with those of the two other draft AC routers I've reviewed so far, NETGEAR's R6300 and Buffalo's WZR-D1800H and WLI-H4-D1300 bridge.

All three use the same Broadcom BCM4706 CPU. At 256 MB, the AC66U has double the memory of the other two routers, but the same amount of flash. The same 7 port Broadcom Gigabit switch is used in the Buffalo router, but NETGEAR opted for a smarter version.

The same Broadcom BCM4331/BCM4360 radio SoCs are used in all three products. But the ASUS is the only one of the three to use dual-band external antennas vs. six internal single-band. This means the external circuitry connecting the radio SoCs to the antennas is different. It looks like the Skyworks 5 GHz amplifiers made it into ASUS' design. But the SiGE 2.4 GHz RF front-ends in the NETGEAR and Buffalo routers are replaced by other, discrete components.

The AC66 is as similar to the N66 on the inside as it is on the outside—at least the way it is constructed. The photo below shows the same full-width heatsink used on the N66 that is thermally coupled via thermal pads to two RF shielded compartments below it.

ASUS RT-AC66U board top with heatsink

Slipping the assembly out of the case and flipping it over shows the bottom covered by a large plate similar to the one covering the N66's underside. I assume this plate serves as a heatsink since it was pretty warm, as was the outside bottom of the router.

ASUS RT-AC66U board bottom with plate

ASUS RT-AC66U board bottom without plate

ASUS RT-AC66U board top without heatsink

Plug Your Wi-Fi Holes With A Powerline Network...

Everything You Need To Know About Wireless ...

Why You Don't Need MU-MIMO