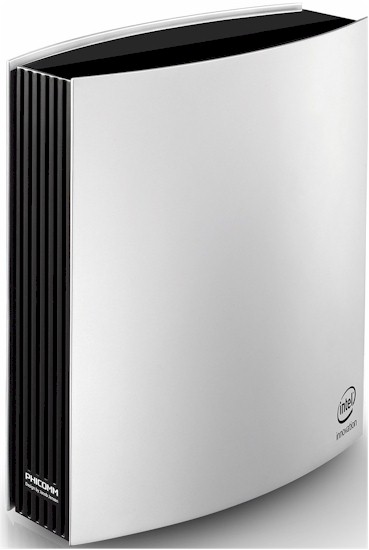 Ever since ASUS announced its Intel-based Blue Cave router last June, Wi-Fi aficionados have been impatiently waiting to see whether it can make their Wi-Fi soar to new bandwidth heights. But the birthing process has been long and Blue Caves just started to ship last month.

Where ASUS decided to go with a 4x4 AC design with the Blue Cave, Phicomm opted for a more pedestrian 3x3 AC1900 class design, most likely to achieve its lower price, which has ranged between $100 and $140 over the few months since start of shipments. Blue Cave is also doing the Amazon shuffle, but in a higher and tighter range, straying only a few dollars lower than $180.

Phicomm is rather proud of the K3C's grey ("silver")-and-black plastic enclosure design, which was birthed in the Jacob Jensen Design studio and won an IF 2017 design award, according to the K3C's product page. But the color, tabletop only mounting, fairly tall stature and imposing size (approximately 9" x 9" x 3") may not earn it very high WAF, despite its eschewment of external antennas.

There is no callout diagram to be found, so the closeup of the rear panel will have to do. The four Gigabit Ethernet ports are divided between one WAN and three switched LAN ports, each with its own link (but not activity) LED. There's one USB 3.0 port that supports sharing storage, but not printers, and an on/off switch. If you're looking for Wi-Fi on/off or WPS pushbutton switches, you'll find neither. There is a lone LED mounted under the front overhang that's steady blue when all is well and blinks red during startup. None of this is described in the User Guide.

The K3C's potential draw is that it is one of the first consumer routers using Intel Wi-Fi technology. The technology actually came as part of Intel's acquisition of German fabless semiconductor company Lantiq in 2015. Lantiq was, in turn, a spinoff from Infineon that was sold to a venture capital company in 2009. So Intel's router/gateway Wi-Fi technology comes from an entirely different source than Intel's PCIe and M.2 client adapters. This means you can't infer anything about Intel-based router Wi-Fi performance from how their laptop cards have performed

FCC internal pictures are still sealed under short term confidentiality, but good ol' KoolShare has plenty of pictures for you to check out. WikiDevi must have used the pictures for its K3C database entry, from whence the component information below comes. It's interesting that both the K3C and Blue Cave use a two board design with compute core on one and two radios on the other. The K3C's boards are shown below.

The table summarizes the key components for the K3C and Blue Cave. Both use the same dual-core Intel PXB4395EL processor, but different radios.

Build A Wi-Fi Performance Analyzer For $75...

RT-AX88U 2.4G drops on some Firmware Versions
Hello Guys, I recently bought an RT-AX88U, HW rev: A1.1, out of the box the router worked fine, but for some reason when I upgraded to the latest Firm...
More than two VPN clients running?
Hey! I really don't now why but I can't have more than two VPN clients running. My VPN provider is NordVPN and I want to have two clients running to t...
ExpressVPN Lightway protocol / wireguard
Recently ExpressVPN launched their version of Wireguard called LightWay and it is available on their desktop and mobile device apps AND on their Asus ...
[Release] Asuswrt-Merlin 384.19 is now available
Asuswrt-Merlin 384.19 is now available for all supported models, except for the RT-AX56U (no up-to-date GPL available for that model).The main changes...
Bug: Only 1st OpenVPN works
Found an issue in version 384.19: Same VPN client configuration (TCP / UDP) always works when it is the 1st VPN in the list, but the EXACT SAME config...